All new. Seven day listings.., most are one of a kind

Festive Frida Kahlo had found her place in the world. She is currently adorning the rainbow tree in the fabulously eye popping Little Bit Margate shop on Broad Street.

I have just added a few ebay listings with more to follow in the next day or two. I’ve started with the Beach Boys and some Dylans.

Is there anyone I have made that you’d like to see available to buy?

Here’s a new finished commission request for a Mary Poppins.

Julie Andrews in the film. She has blue skirt, white blouse with red bow, black boots, long fitted black coat and her hair has a little bum at the back.

Her coat is removable and fastens with a poppa and her accessories are a tapestry carpet bag and black hat with flower braid trim and a hat pin.

This is so exciting! About a year ago my friend Wendi had this woolly Jeremy Corbyn doll and finally they got to meet in real life.

I also made a small Jeremy doll who had a few photos taken around Westminster.

So…. I had this idea to make lots of Dylans and photograph them all, to try to replicate the LP covers. It never quite happened because I made a lot… Too many, really, and they were never all completed.

I never thought anything would happen to them, but I have been finishing them all to coincide with the Danile Kramer photography exhibition at SNAP Galleries.

Can you spot them all?

Yesterday I also dropped off two more folky Bobs. I think these two are my favorites… of and Nashville Skyline Bob because of his guitar.

This was an exciting little project! It took me a while to make 2 sets of Pet Sound Era Beach Boys. I was able to deliver them to the amazing SNAP Galleries, where they were on show in the Window!

I’ve been to a few exhibitions to the Gallery before and they are all about Rock & Roll photography. 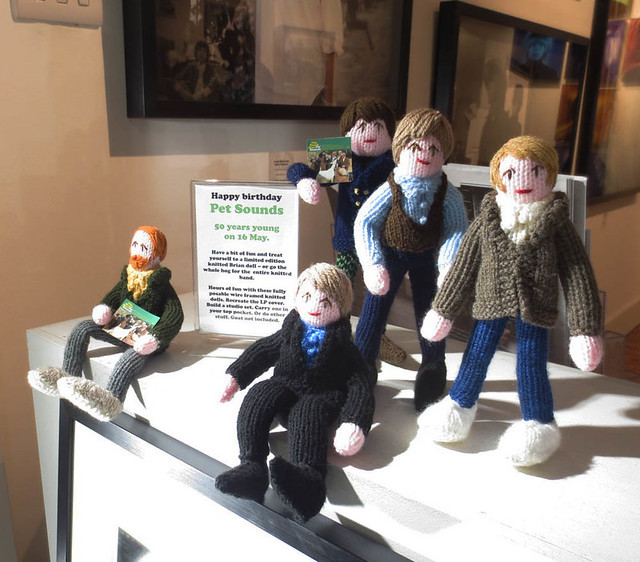 The guys were obviously based on the Pet Sound cover line up. Here are: 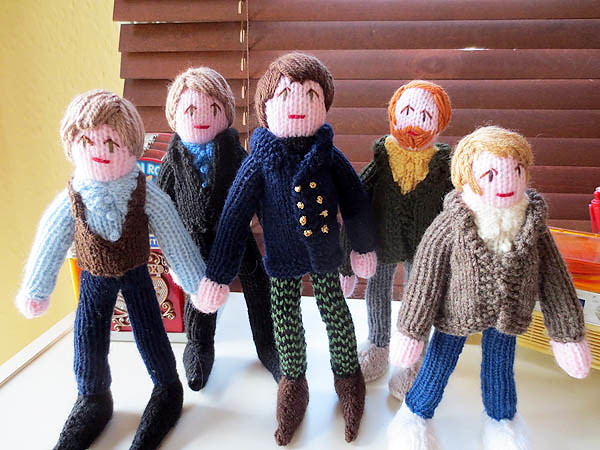 How may Brian Wilson’s does it take to make a Classic album? I made 5!

Where are the Wrecking crew? 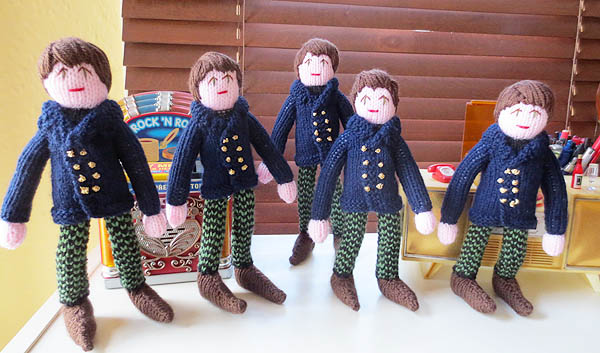 So… I really love the Pre-Raphaelites. I wrote my dissertation on Lizzie Sidall and Ive always loved William Morris ans his ideas about craftsmanship. So I’ve been wanting to visit William Morris’s Red House for a while now. When I went yesterday I seemed like a good idea to take the knitted Pre-Raphaelites with me.

William and Jane had a good look around the house.  This is the Wedding mural that they are both painted into.

Admiring the wall paper! Jane looks happy with it.

…. And the garden, which was beautiful.

The aspect from the front.. All the gang appreciated it.

I showed the tour guide, Steve, who got a few colleagues to come and see them. Then he asked, would I show then to Robynn, the House manager who was working in the shop. So they came out again.. on the counter.

She was very happy to see them all.

It was a really lovely day out & well worth a visit. More at: http://www.nationaltrust.org.uk/red-house

So….These have been along time in the making. I was asked to make two sets of Pet Sound Beach Boys and two additional Brian Wilson by Guy White at Snap Galleries. This was to celebrate the 50th Anniversary of Pet Sounds and Brian Wilson’s shows at the Palladium in May 2016.

I have loved this album for year and was REALLY tempted to get tickets for the Palladium shows myself, then I remembered seeing if for the first time at the Royal Festival Hall when he played there. That was stunning. tears & all. I though I’d content myself with that amazing experience!

I worked in the Boys for around 2 months when I could… there were times when I was really quite behind and wasn’t sure I would have 2 sets & 2 Brians ready for May!

I am pleased with how they came out. During this process I found a new way to improve the whole quality of the figures. In stead of using regular stuffing I wrapped the wire frame with strips of wadding. All the wire is nicely concealed that way.

They look amazing in the galley window!

This is an exciting announcement, the first ever WoollyRockers Records CD, release no.1!!

It’s called Tumbleweedin’ by Jay Fynn/Exit From The Auditorium. Six track CD; Indie, Folk.
I did the photography for the cover image, all my favourite things: it’s Jay Fynn and a woolly Townes Van Zandt doll in a launderette.
Listen here: https://soundcloud.com/exitfromtheauditorium/sets/tumbleweedin

Tumbleweedin’ by Exit From the Auditorium.
Newly written songs by Mr. Jay Fynn – all amazing! Here’s a little bit about each one:
1. Chasing Leaves
This is a glimpse into the world of Mr Fynn’s profession as a gardener and precision mower. Stories of the gardening gang; the van, the leaves…..which don’t ever seem to stop. The beautiful chorus goes…
I’ve been chasing leaves all morning
And I just can’t seem to stop yawning
Cos chasing leaves is boring
Cos the leaves just keep, keep, keep on falling
2. If The World Ended Tomorrow
Jaunty little number in the style of a traditional folk song, like “What Did You Learn In School Today?” Hypothetical funny ramblings about not having to do the boring things anymore, partly inspired by Jay’s other job working in retail….
If the world ended tomorrow I wouldn’t have to go to work
Or polish my work boots or iron my work shirt
No moronic fools, no more rules to follow
If the world ended tomorrow
3. On The Townes Tonight
Part Ballad, part-homage to the late great Mr Townes Van Zandt. Really lovely opening based on a specific personal recollection of an evening spent listening to Townes, moves along to a verse about TVZ’s life with references to various quotes, like the Steve Earle one….
So lets dance on Bob Dylan’s coffee table
Wear your favourite cowboy boots and I’ll wear mine
From the Texas plains to the mountains of Colorado
Counting stars on the Nashville skyline
We’re on the Townes Tonight
The final verse is about the unknown fate of the woolly Townes doll – who knows where he is now? I took him out on the town and after some guitaring and a few too may beers he made his escape in the Golden Eagle pub in Marylebone during one of its famous piano sing-alongs. It was a very fitting place to lose woolly Townes…
The road’s his home so he went a-ramblin’
The cowboy poet wrote his last line
I am thrilled to have inspired such a beautiful song with my love of Townes van Zandt.
4. Must-See TV
This one has such a great happy melody. Guess these shows!?
I once taught chemistry
You’ve not got long to live they said to me
So I started cooking meth
I was an ad exec
With a dead mans name on my pay check
And whisky on my breath
There are more verses and as well as the Must-See TV verse there’s an extra amazing catchy refrain with a few more clues, it goes…
From New York to New Mexico, New Jersey to New Orleans
5. Generic Love Song
Inspired by a number of encounters with a couple of supposed ‘professional’ songwriters who were meant to exemplify excellence in the field of songwriting. To Mr Fynn however this particular pair of songsters were guilty of heinous cliches, generic drivel and uninspired blandness. Here’s a snippet…
Something about sunsets and something about fate
Forgive me if I don’t write you a generic middle eight
6. The Music He Makes
The longest song of the collection at nearly 4 minutes. It doesn’t really matter who this one is about, you don’t need to know to appreciate the song. There are clues. It’s a beautiful melody…I think it must be the lilting quality and the minor chords, but this is a bit of a tear jerker. It gets to me….
I’ll never forget the first time I heard him sing
The room was so silent you could hear the drop of a pin
After the show I shook his hand and he signed my merch stand CD
The music he makes speaks to me
So we have six songs: different tempos, different tones, sincere and beautiful, funny and ironic; a lovely mix. All with something unique to say about modern life and songwriting.

You can  buy the CD HERE in the WoollyRockers Shop!

Here’s a lovely out-take from the photo session.